This page dates to 2002, when this book was new. Names, links, and other information may be variously out of date.

(But you can still buy the book!) 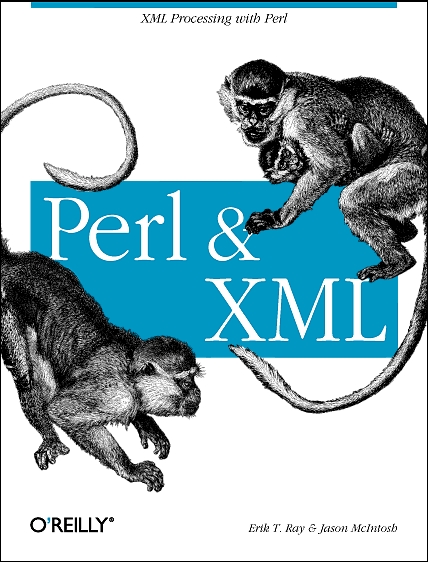 Erik Ray and I wrote this book, published in April 2002 by O'Reilly & Associates, Inc.

The book covers everything you need to know in order to get started with XML processing with Perl. It assumes that you're already comfortable with the Perl programming language, and wish to use it as your weapon of choice for your forays into XML hacking. We focus primarily on working with XML at its lowest common level, with the rules of elements and attributes that all its documents have in common.

The book also touches on using Perl with specific applications of XML such as SOAP, XML-RPC, or RSS. It doesn't, however, delve terribly deep into using these applications, for the same reasons you don't see chapters about using Microsoft Word in a books about C programming, even though Word is an application of C. O'Reilly has many fine books about these buzzy (and fun) topics, if you care to pursue them.

Lots more information written by people better than me at coming up with marketing copy may be found at O'Reilly's website for Perl & XML. You'll find a sample chapter there, and an errata section, though I have a personal errata log here.

You can order the book directly from O'Reilly, or you can snag it from Amazon. You can also wander into your favorite geek-friendly brick-and-mortar bookseller for a copy. I've officially been told that it's all the same to us, however you choose to buy it, so long as you do. :)

How it was Wrought

My friend and cohort Erik Ray (who has also written O'Reilly's "Learning XML") and I wrote this book over 2001, when we worked together within the O'Reilly & Associates tools group (the programmatic side of its production department).

While there, we co-developed "Fox", a lurching behemoth of interlinked Perl modules that can turn FrameMaker documents into DocBook XML, and then back again. We learned an awful lot, and pass this on to you! Luckily for you, the book's examples are a lot smaller and more fun to read than Fox code would be.

I made an embarrassing blunder in the acknowledgements section by failing to give credit to Andrew Turner and Arcus Digital.

Andy is the person to blame for introducing me to Perl and getting me my first real programming job, many years ago. He tech-reviewed this book, too.

Arcus Digital, overlorded by Jim Troutman and Andy, let me host the jmac.org server in its Waterville offices; this machine held the CVS repository that helped Erik and I work together well. (And it will be useful again, when it's time for the second edition!) Arcus also provided me with odd hacking jobs while I was finishing this book. Jim also tech-reviewed the book even though nobody asked him to, because that is his nature.

This is a webpage by Jason McIntosh.